Get 30% or more off of these select WWI titles!

“Given the recent controversies regarding religion in the military, it is worthwhile for professional soldiers to examine the benefits chaplains provide to those in uniform. Sky Pilots provides a valuable, and often touching, look into the critical role chaplains fulfill. Shay makes extensive use of personal letters and diaries, citing the chaplains’ enormous positive impact on their units-from providing the simple comforts of home at mobile canteen trucks to tending to the men’s spiritual needs. This alone makes Sky Pilots worthy of professional study and debate.”—Military Review 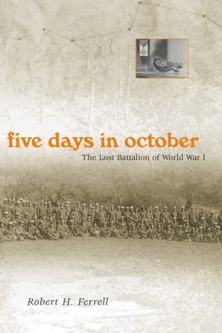 Five Days in October: The Lost Battalion of World War I by Robert H. Ferrell

Now, in Five Days in October, historian Robert H. Ferrell presents new material previously unavailable-about what really happened during those days in the forest. Despite the description of them as a lost battalion, the men were neither lost nor a battalion. The name was coined by a New York newspaper editor who, upon learning that a sizable body of troops had been surrounded, thought up the notion of a Lost Battalion-it possessed a ring sure to catch the attention of readers.

“Ferrell’s account and reexamination is concise and well-written, moving seamlessly from event to event as he conducts a thorough investigation into the actions-and inaction-of the officers directly involved with the entrapment and eventual relief of those troops.”—Military History

German Propaganda and U.S. Neutrality in World War I by Chad R. Fulwider

“Until now, there has been no comprehensive study of German propagandists’ efforts to keep the United States out of the First World War. In this deeply researched book, Chad Fulwider presents a nuanced view of these propaganda operations, exposing many fascinating aspects of these activities and filling a large gap in the historiography of World War I.”—Thomas Boghardt, author of The Zimmerman Telegram: Intelligence, Diplomacy, and America’s Entry into World War I 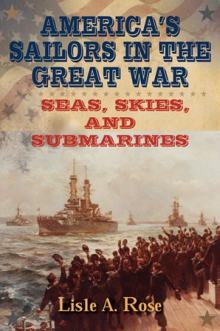 America’s Sailors in the Great War: Seas, Skies, and Submarines by Lisle A. Rose

“The author tells the story of how the U.S. Navy successfully re-invented itself from a navy built around a blue water battle fleet to a force whose main mission was antisubmarine warfare. Woven within this larger story are tales of sailors committed to the land and air battle on the Western Front.”—The Journal of America’s Military Past

This book is the first full-length account of the actual accomplishments of the 92nd Division. By framing the military outfit’s reputation against cultural context, historical accounts, and social stigmas, the author proves that the 92nd Division did not fail and made a valuable contribution to history that should, and now finally can, be acknowledged. Unjustly Dishonored fills a void in the scholarship on African American military history and World War I studies.